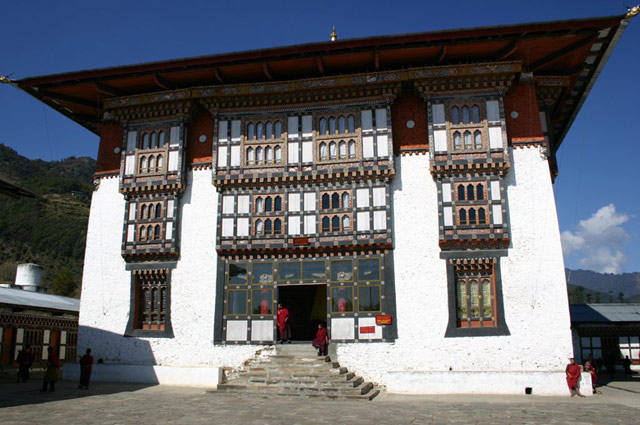 Drametse is one of the largest and most important Nyingma Monastery in Eastern Bhutan. From the highway between Trashigang and Mongar, it is around 18km/1hr drive along the dirt road, gaining around 1350m. Drametse Monastery was founded in 1511 by Ani Choten Zangmo, the grand-daughter of the famous Bhutanese saint Pema Lingpa (1450-1521), who named the place as Drametse, meaning no enmities place or peak. It is the home of Drametse Choje family which has produced many eminent religious personalities including three Shabdrung incarnations and the seventh Gangtey Tulku. The current spiritual head of Drametse is Sungtrul Rinpoche, who is believed to be the eleventh incarnation of Pema Lingpa. There are over 50 Gomchens (lay or married monks) living here. The monastery is famous as the origin of the Dramtse Nga Cham (the drum dance of Drametse), which has recently been classified by UNESCO masterpiece of oral and as an intangible world cultural heritage. The monastery contains many ancient manuscripts or text books. It has recently been repainted and many parts of the monastery has been added on over the course of time. On the way to here and from the monastery, good views can be seen in all directions.