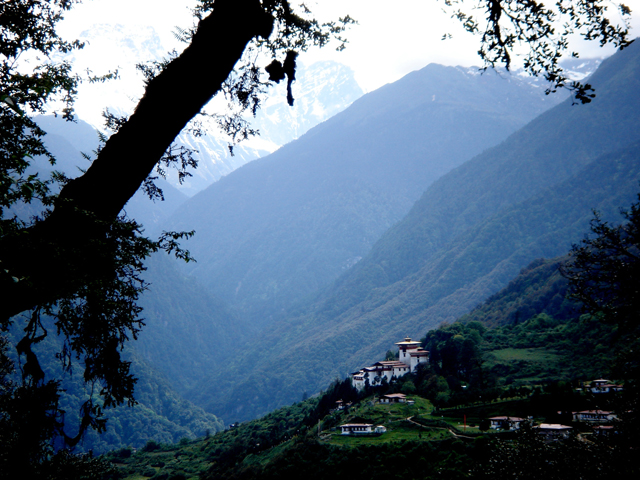 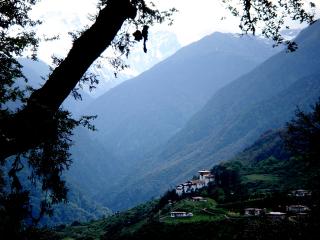 Gasa Dzong is the administrative headquarter of the Gasa Dzongkhag, which consists of Goen Khartoed in the upper region and Goen Kharmed in the lower region. Legend has it, that when Zhabdrung Nawang Namgyal, following the footsteps of his forefathers was making his way to Bhutan in 1616, the deity of Gasa traveled to Tsari Kibuthang in Tibet to welcome him. The Zhabdrung blessed the deity and gave him a new name “Trashi Thongmon”. Thus, the Dzong was named as such. It is not clear when the Dzong was built but most historians agree that it was built by Zhabdrung Nawang Namgyal as a defence fortress and that the construction took place sometime around 1640's.
Unlike other Dzongs in Bhutan, Gasa Dzong is circular with three Ta Dzongs (watch towers) placed on strategic points. The Utse (central tower) is built directly above the cave where Dupthob Terkhungpa, a Tibetan saint supposedly meditated in the 13th century. The Utse is a three storied building.
Monks from Punakha or Thimphu led by the Drapai Lopoen comes to Gasa for the annual offerings to the deities, in the last week of the 10th month every year. In honour of Mahakala, gun salutations are performed on the 29th day. A common belief is that during the time of Terkhungpa in the 13th century, there lived a famous Bon master. During a competition of spiritual attainment, the Bon master also proved that he could walk up the cliff with ease. Terkhungap perhaps expressed his appreciation to this high achievement. Today, as a token of appreciation to the Bon master, a Bon priest also participates in the ceremonial procession wearing his full ritual attire while making offerings to Mahakala. Gasa Tshechu is annually held at the same time as Thimphu Tshechu; however the first day of the Tshechu is held in Phu Lhakhang, the original place of the festival.