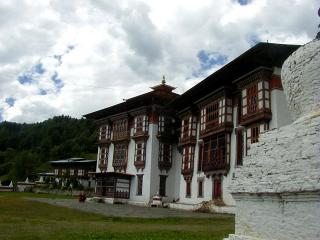 The place is where Guru Rinpoche had meditated in the rock and had left the imprint of his body (kurjey) on solid rock which can be seen from inside the shrine. The complex consists of three large temples . Upon entering, the first temple to the right is Guru Lhakhang (which houses the cave) dating from 1652. The middle temple Sampalundrup was built by the first King Ugyen Wangchuk in 1900, during his tenure as Trongsa Penlop. The third temple is constructed under the patronage of Her Majesty queen mother Ashi Kesang Wangchuk. There are many fascinating myths and stories associated with the temple.The temple also performs an annual festival of masked Dances and other cultural performances