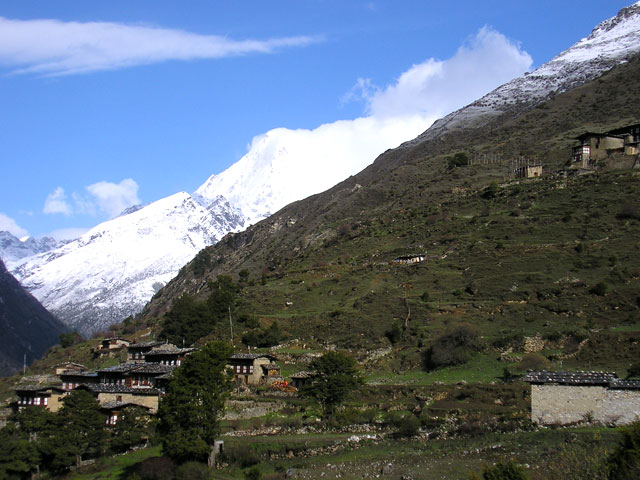 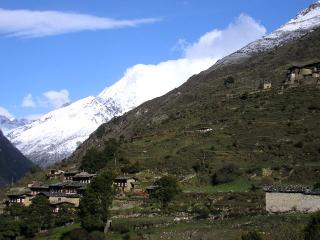 Laya village is under Gasa district or Dzongkhag. The people of Laya have their own dialect, customs and distinct dress. The women keep their hair long (unlike other parts of country) and wear peculiar conical bamboo hats with a bamboo spike at the top. These hats are held on by a beaded band that reaches to the back of the head. They dress in a black woolen jacket and a long woolen skirt with a few stripes. They wear lots of silver jewelry on their backs and some of these display include an array of silver teaspoons.
The Layaps call their land home BAYU or bey-yul (hidden land). Laya is one of the highest villages in the country, at 3700m. The peak of the daunting Tsenda Gang (7100m) towers over the village, which is spread out over a hillside near the Tibetan border. The cluster village is completely hidden by ridges and there are around 140 households spread into small villages in the gewog (sub-district).Villagers grow turnips and mustard and produce one crop of wheat or barley a year, before the region is snowed in for the winter. Its primary source of food and income is the Yaks. During the summer, most people move to the high pastures and live in black yak hair tents. During the evening at your campsite, the village women are easily encouraged to stage an evening 'cultural show', which consists of Bhutanese circle dancing accompanied by traditional Bhutanese and Layap songs. The existing infrastructures include one Community School, BHU (basic health unit), Forest Guard Post, two Wireless stations.

Details on how to get there can be found in several parts of our website including in Chomolhari to Laya Trek and also in the Gasa to Laya Trek section.