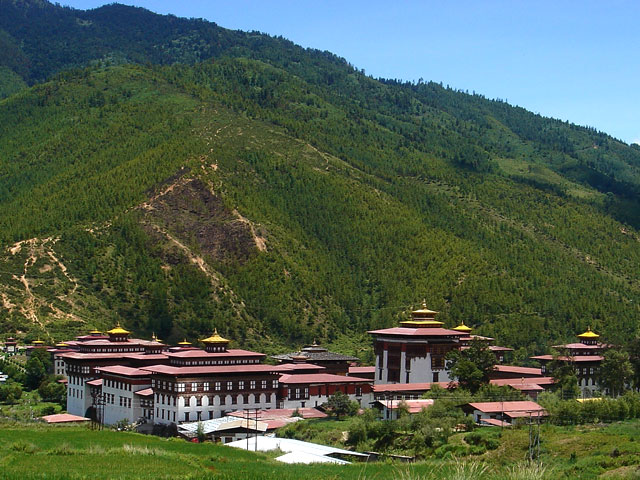 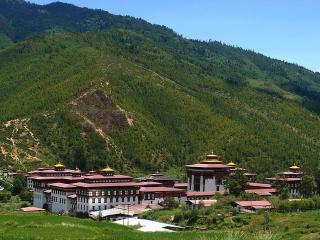 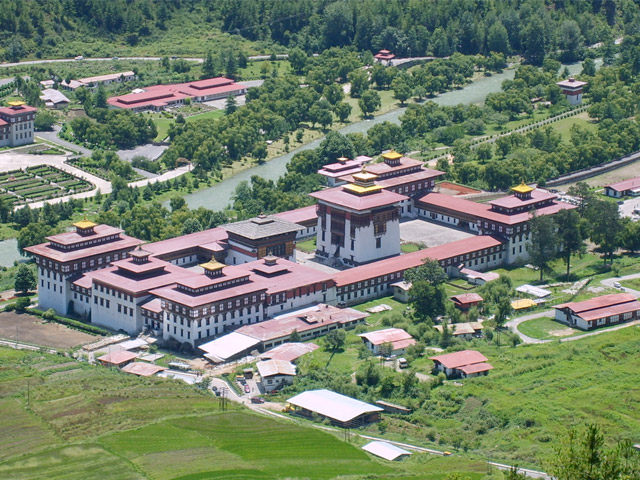 Tashichoedzong, meaning the fortress of "auspicious doctrine" has traditionally been the seat of the Dharma Raja and summer capital of the country.In 1641 Zhabdrung built the Tashicho Dzong in place of the Dho Ngon Dzong built by Lama Gyalwa Lhanangpa. In 1771, when Dechen Phodrang was destroyed by fire, everything was moved to the lower Dzong, which was expanded then, and again by the 13th Druk Desi (1744-1763), and further expanded in 1866. It was damaged during an earthquake of 1897 and rebuilt in 1902. King Jigme Dorji Wangchuck had it completely renovated and enlarged over five years after he moved the capital to Thimphu in 1952. Presently it houses the throne room and offices of the king, the secretariat and the ministries of home affairs and finance. The main structure of the Tashichoe Dzong is two-storied with four three-storied towers at each corner, topped by triple-tiered golden roofs. In the center of the building is a large central tower called utse.
This fortress serves as the office of the King, ministers and various government organizations. It also is the headquarters for central monastic body of Bhutan. Bhutan's spiritual leader Je-Khenpo and the monks of both Thimphu and Punakha reside here during summer. It is located around 5km from town

In 1216 Lama Gyalwa Lhanangpa built Dho-Ngen Dzong (Blue Stone Dzong) on the hill above Thimphu where Dechen Phodrang now stands. A few years later Lama Phajo Drugom Shigpo, who brought the Drukpa Kagyu lineage to Bhutan, took over Dohon Dzong. In 1641 the Shabdrung acquired the dzong from the descendants of Lama Phajo and renamed it Trashi Chhoe Dzong (Fortress of the Glorious Religion). He arranged to house both monks and civil officials in the dzong, but it was soon found out to be too small for both. The Shabdrung then built another dzong, known as the lower dzong, for the civil officials and used the original building for the monks. The 13th Druk Desi, Chhogyel Sherab Wangchuck (1744-63), later enlarged Trashicho Dzong so that it could again accommodate both civil officials and monks.

The original dzong was destroyed by fire in 1771 and was abandoned in favour of the lower dzong, which was expanded. That dzong itself suffered a fire in 1866 and twice since then. The five-storey utse (central tower) was damaged in the 1897 earthquake and rebuilt in 1902.

When he moved the capital to Thimphu in 1962, King Jigme Dorji wangchuck began a five-year project to completely renovate and enlarge the dzong. The royal architect performed repairs without touching the utse, Lhakhang Sarpa or any other of its chapels at the centre. Other than these structures, the entire dzong was rebuilt in traditional fashion, without nails or written plans.

The dzong housed the original National Assembly and now houses the secretariat, the throne room and offices of the king and the ministries of home affairs and finance. The northern portion is the summer residence of the dratshang (central monk body). The outer structure is two storey high with three-storey towers at the four corners projecting out over the walls. The outer walls are built of trimmed and fitted granite blocks, unlike other dzongs, which were made of roughly dressed stones. Similarly, the dochey (courtyard) is paved with rectangular stone slabs, in contrast to other dzongs, which use only rough, irregularly shaped stones as paving.

Unlike most other dzongs, Tashicho dzong has two main entrances. One leads to the administrative section to the south, and another at the north leads to the monastic quarter where the dances of the annual tsechu festival are performed. The dzong’s Sangay Tsokhorsum Thondrol depicts the Buddha Sakyamuni and his two disciples.

Below the dzong is an excellent example of the traditional cantilever bridge. To the south of the dzong is set of low buildings that houses additional administrative offices. West of the dzong is the small tower of Ney Khan Lhakhang, which houses a statue of Sakyamuni flanked by the prospective deity Gyenden Jagpa Melen and Dorje Daktshen, the female guardian deity of Phajoding.