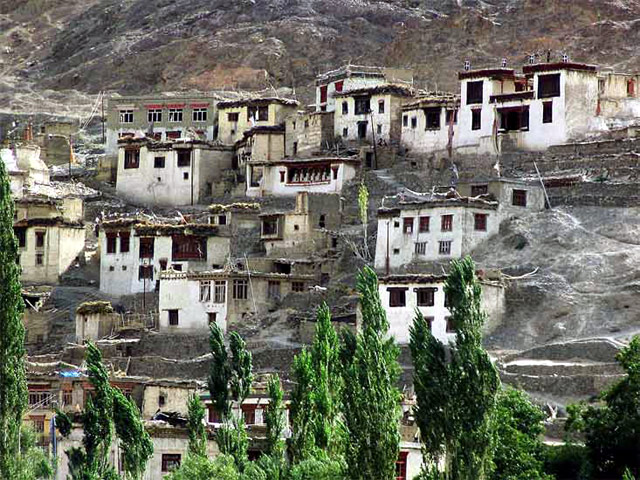 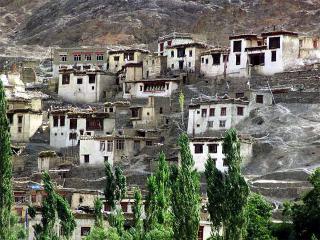 The Ladakh and Zanskar valleys are trekker's delight. Little Tibet' or, 'the moon-land' or 'the last Shangri La' are all names that have been applied to Ladhak. It is an 'other-worldly' place with gompas perched on soaring hilltops, shattered looking landscapes splashed with small but brilliant patches of green and ancient palaces clinging to sheer rock walls. Leh at a height of 3,500 meters is the main entry point to this region. The Ladhak and Zanskar valleys are trekker's delight. The region has the highest motorable road in the world and getting there by road, from either Srinagar or Manali provides one of the most exquisite views of the Himalayan range. Ladakh lies at altitudes ranging from about 9,000 feet (2750m) at Kargil to 25,170 feet (7,672m) at Saser Kangri in the Karakoram. Thus summer temperatures rarely exceed about 27 degree Celsius in the shade, while in winter they may plummet to minus 20 degree Celsius even in Leh. Surprisingly, though, the thin air makes the heat of the sun even more intense than at lower altitudes; it is said that only in Ladakh can a man sitting in the sun with his feet in the shade suffer from sunstroke and frostbite at the same time!
Ladakh is surrounded by mountains and made up of mountains. Sheer walls of rock and ice divide the Indus Valley from Tibet, Kashmir and Himachal Pradesh, and human habitation is restricted to narrow strips of greenery clinging to the rivers that drain down from mountain glaciers. This rugged region is home to one of the last undisturbed Tantric Buddhist populations on earth, protected from colonial interference, rampaging Mughals and the ravages of the Cultural Revolution by sheer force of geography.
From November to May, Ladakh is almost completely cut off from the outside world. Even in summer, getting here involves crossing the highest mountain passes in the world, or a hair-raising flight that weaves between the peaks. Isolation has preserved an almost medieval way of life, dictated by the changing seasons. However, change is coming to this mountain Shangri La. Tourism and hydro-electric power are flooding the region with money, and global warming is altering rainfall patterns, threatening farming cycles and Ladakh’s traditional mud-brick architecture.
Unlike the rest of Jammu and Kashmir, Ladakh has seen little violence since Independence. Most Ladakhis are Buddhist, with smaller communities of Shia and Sunni Muslims in Leh and the valleys surrounding Zanskar and Kargil.

Attractions in Ladakh, around and from Ladakh