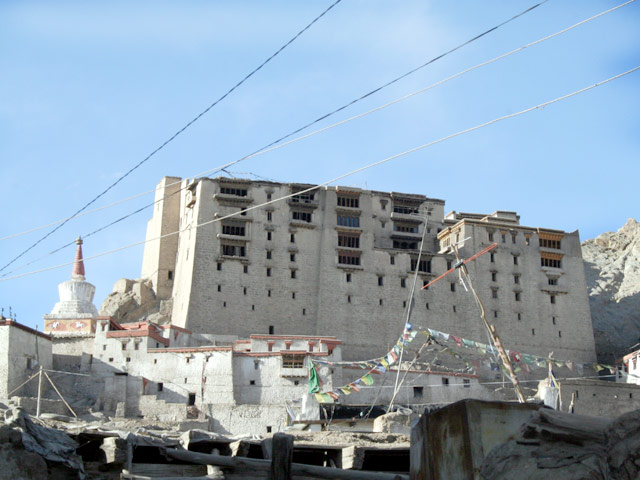 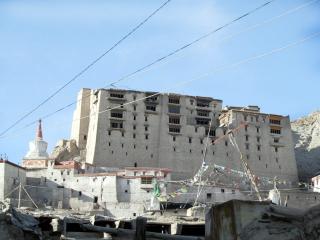 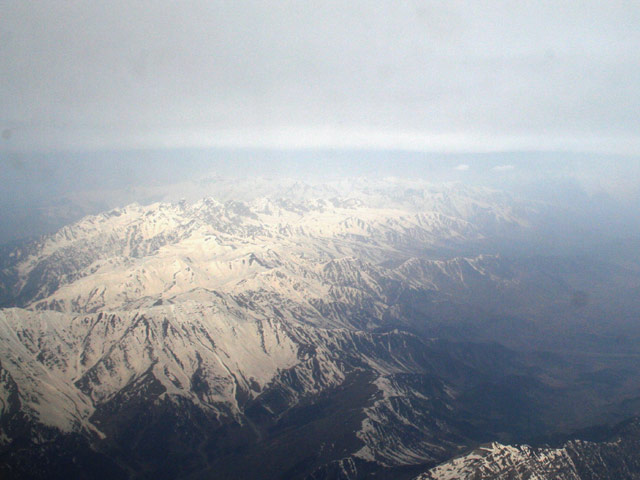 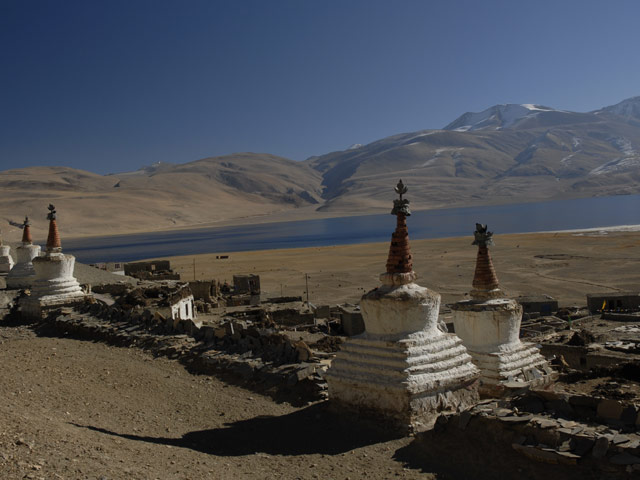 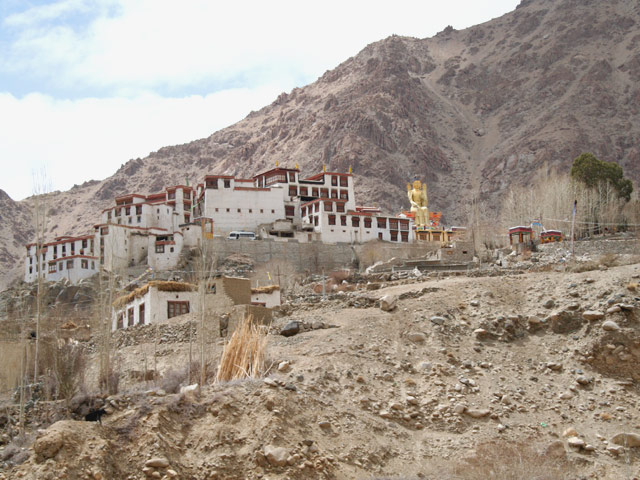 Leh , the capital of Ladakh is located in the heart of Indus river valley (34.17° N 77.58° E), at a crossroads of the old trading routes from Kashgar, Tibet, and Kashmir. Its importance as a trading town slowed down with the partition of British India, and ended with the closure of the border in 1962 during the Sino-Indian war. Since the 1999 war with Pakistan, and the consequent development of the Manali-Leh highway, it has become a bustling tourist town, with large numbers of Kashmiri traders. It's a small town, easy to get most places by foot. The old town is a compact area of mud brick houses and narrow lanes directly to the east of Main Bazar. Changspa is the agricultural "suburb" northwest of the center, with many guesthouses. Its elevation is approximately 3500 meters (11,500 feet), so take it easy on your first few days here or risk possible altitude sickness. Even experienced high altitude travellers might have experience some difficulties adjusting to altitude.
There are two roads in to Leh, one from Manali in Himachal Pradesh in the south (475km), and one from Srinagar in the west (430). Both routes are equally spectacular in different ways, and both are time consuming with winding, narrow roads, and numerous military checkpoints. The road from Srinagar runs at a lower altitude and therefore it is remains open for longer period (normally from June till October). It follows the traditional trade route between Ladakh and Kashmir, which passes through many picturesque villages and farmlands and takes two long days, with an overnight stop in Kargil. The route between Manali and Leh is one more commonly taken by tourists. It takes two days, normally with an overnight stops in Kyelong (alt. 3500) and in tent camp accommodations in Sarchu (4200) or Pang (4400). This is world’s second highest road is spectacular and rugged traversing 5328m Tanglang la pass . This road is generally open after mid July till about end of September. With private vehicle, idly it is best to stop one night in Keylong or Jispa and one night in Sarchu on the way from Manali to Leh or vice versa. The best and the easiest way to get to leh, Ladakh is to fly there. There are flights through-out the year and more services during the summer months. Flights to and from Leh should be booked early because there are lots of visitors during the tourists season and there are limited flights during other times. Leh airport code is IXL and located about 7km away from the town.
On one level, Leh is a tourist town, with all the travel agencies, souvenir shops and pizza restaurants you would expect to find in a bustling backpacker centre. On the other hand, how many other tourist towns back onto ruined palaces in the lee of the Himalaya? The sky overhead is a vivid dark blue from the altitude – a breathless 3505m above sea level – and the modern town melts into a crumbling old city of timber and mud bricks. The Indian Army maintains a large military base near the airport to patrol the borders with China and Pakistan, but their main job is repairing roads and bridges and keeping the mountain passes clear of snow.
Leh has for centuries been an important stopover on trade routes along the Indus Valley between Tibet to the east, Kashmir to the west and also between India and China. The main goods carried were salt, grain, pashm or cashmere wool, charas or cannabis resin from the Tarim Basin, indigo, silk yarn and Banaras brocade.

Attractions in Leh, around and from Leh